While the first ITAP lecture was concentrated on the means by which we could lay our ideas on a physical surface, the second enumerated several ways of redefining the ideas that we come up with while improving our creative mind. I shall describe two of the main principles that constitute the Development of Creative Thought ad Structure.

One of the starting principles in this practice isovercoming mindsets. Mindsets are the things that prevent us from developing new and innovative ideas.

I had this problem when I was trying to sketch the design of an original pinhole camera. A pinhole camera is in fact a small camera obscura: a box with a tiny hole on one side and a photosensitive material on the other. Optics say that light coming through the small hole hit the photo material and imprint a reversed image onto the material. Most people 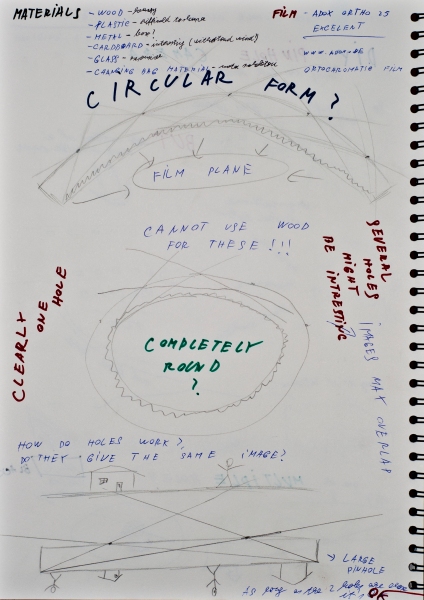 usually put photo paper in that box because of the ease of tray processing. I wasn`t happy with this solution because in this case I would have ended up with a reversed image. I didn`t want to use sheet film either because it requires special drums for processing and wouldn`t have given the panorama capabilities that I wanted the camera to have. Instead, while drawing this in my RVJ, I came up with the idea of using regular 120 film taped into a box of the same length. This would give a huge perspective while retaining the original un-reversed image and allowing for simple processing in a development tank. I then went further and asked: what if the camera was slightly curved? why not be completely round to have a 360 view? why not make several holes so that the image could spread even wider?

Although a rather gold experiment, I think it is worthwhile trying.

Another way of successfully developing this practice is by getting rid of assumptions; and when I say this, I mean using an open mind to approach ideas. Thus one can be able to make unusual analogies or compare things that usually have no relationship in between.

I was confronted with this problem when I needed to express in the magazine a contrast between different techniques of portraying  a vision; in this case, the difference between using a camera and using brushes to illustrate a landscape since our target audience are art oriented people. After consulting with Matthew (one of my classmates), we agreed that I shall do the photos and then Matt would use his skill as an illustrator to draw have of the images, which would then be

put together in Photoshop and designed in a double spread. This should ensure that the encoding of the message is easily visible.